“FCC Recycled – our war on waste”

Right from the earliest days of our original clubhouse build, our club members have been actively involved in recycling materials. Read-on to discover our heroic efforts fighting against waste (or is it simply obtaining unaffordable materials?).

The original clubhouse was constructed over the best part of four years and It just so happens that in the 1920’s there were two neighbouring timber yards, Porta & Sidney Panther. Both firms purchased numerous of our fundraising debentures and, reading between the lines of committee reports, also provided cheap or offcut timbers for the construction of the clubhouse.

The construction of our new clubhouse demonstrates better evidence of our recycling endeavours as timber was salvaged from the demolition of the original building in 1979. This came in the shape of wonderful Oregon beams which were repurposed as bearers and part of the window frames at the rear of our current building. Added to this, the two long wooden benches in our clubhouse today were originals from the old clubhouse (https://fairfieldcanoeclub.org.au/create-article-13) 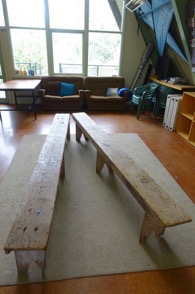 Foster Rossetto explains: “Joe (Alia) and I made sure that all the Oregon beams were retained. If you look on some of them, they've still got the stamp on them "1904 kiln dried, Ontario, Canada". That timber will never bend. Because it was rough-sawn, I went down to a cabinet maker factory, where my dad used to work, and because I knew the owners and their younger brothers used to play footy together with me, I said, "Look can you help me out?" and they actually dressed the timbers for us...they said "this is bloody awesome can we buy it off you for tables?" "No, we've got to build the floor"! But we didn't have enough, so we had to buy some New Zealand Oregon which is a lot of rubbish compared to the Canadian Oregon.”

We also had to glaze these wonderful Oregon window frames and if you look at this photo of the bare looking interior of the A-frame in 1991, you can spot the front window of shop that has been re-fashioned. (Ed. Can anyone tell us about the origins of this glass shopfront windows?) 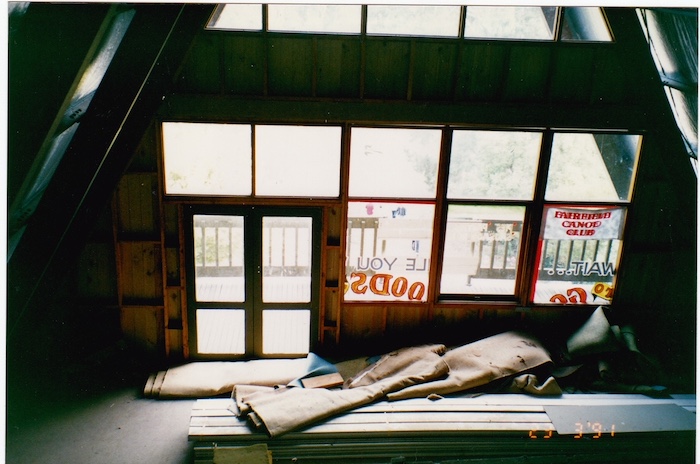 Before construction could commence on the A-frame, the site needed to be dug-out, what to do with the removed soil? This immediately became part of our now improved slope to the river below. The next obstacle to deal with was a significant gap between the new retaining wall & the edge of the current car park. It just so happened that someone working in Foster Rossetto’s office was digging a swimming pool & needed to get rid of their ‘clean-fill’. Problem solved!

Walking down toward the river you will next spot our wonderful, large & recently upgraded riverside landing. Alex James relates that in 1990, whilst dismantling the rickety-old landing (date of construction unknown) a great challenge was encountered: how to remove the time-hardened tram lines that formed the skeleton of this structure. Fortunately, Alex was almost able to replace ‘like-with-like’ when he ‘recovered’ some steel monorails for the overhead gantries that moved material around the ASTA (now Boeing) factory in Fisherman’s Bend. These were cut into manageable lengths for transport by club members to Fairfield in the back of Joe Alia’s little one-ton ute, “the poor old thing struggling” with its massive load!

There is of course the additional story of the enrichment of our soil with waste material, courtesy of our ‘long-drop’ dunny placed somewhere near the river for a good many years. This riverbank ‘enrichment’ plant was not without its issues. (https://fairfieldcanoeclub.org.au/history-snippet-16 )

“Once the old club house was finally demolished (1982) members had to rely on a “tin can dunny” located about the same place as the current outside canoe rack. As there was no traditional “dunny can man” pick up it was left to some lucky members to bury the contents on the property as required. Usually this was no problem, but on one occasion the next-door neighbour (& former FCC President) Dudley came investigating, prodding around with his feet on the recent soft excavation. Lofty, the member who had just completed the burying task, felt guilty that he hadn’t dug a deep enough hole so he kept very quiet and sheepishly withdrew. Fortunately, Dudley was wearing gumboots." 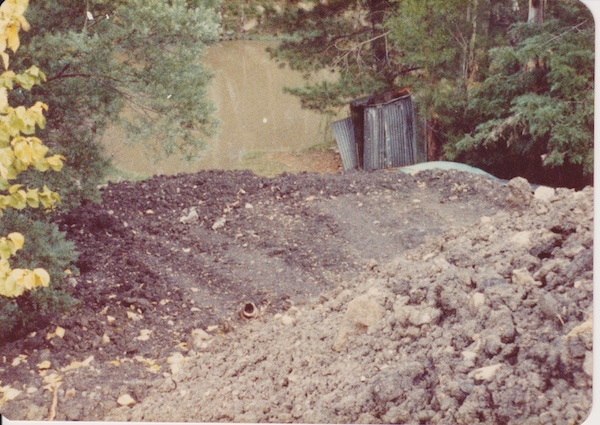 As Alex James opined; “In the early ‘90’s there was nowhere to get changed and nowhere to go to the toilet. There was a little side shed toilet down the backyard, but I never used it, it was too gross! The ducks nested in it at one stage we had our very own toilet duck so there was a tin can in there but, boy-oh-boy, it was pretty ripe, and I never used it”.

We all regularly help recycle flotsam from the river..….tennis balls for the dog, soccer balls for the children, plastic bottles for the yellow-lidded bin and we hear Gary Flanagan recently found a kayak as well!

Well done FCC!
We would love to learn of any other recycle gems to add to the above collection.

Top photo: from the ABC website, adverstising the war on waste series.

Produced by LoftCom for FCC. See our privacy policies